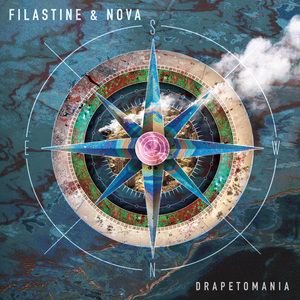 music from another world." Another world is exactly what they aim to create, using sound, video, design, and dance to express a radically different vision of the possible.

Filastine is the handle of Barcelona-based composer and video artist Grey Filastine. A former taxi driver from the United States, Filastine studied percussion with the coke-fueled carnival batucadas of Brazil and mystical brotherhoods in Morocco. In 1999 he founded the Infernal Noise Brigade marching band, putting these rhythms to use in a live soundtrack for the Seattle WTO revolt and the globalization protests that followed. DJ/Rupture discovered and released Filastine's premiere album, Burn It! (2006), launching a decade of critically-acclaimed albums and world tours. One of those tours brought him to Jakarta where he met vocalist Nova Ruth, rhyming in Indonesia's seminal rap group Twin Sista. Nova's deep musical roots add much to Filastine's sound; she was raised singing pentecostal spirituals with her priest grandfather, reciting Quran, and playing Javanese gamelan percussion. Beyond music, Nova's continues her "day job" building networks among Southeast Asia's video activists and hackers.

Together they create unique and fearless interventions: an official mixtape for The Act of Killing documentary, a sound swarm at the Paris Climate Summit, a performance in the Calais Jungle migrant camp. Their latest effort, Abandon, is a video series profiling dances of emancipation from work, filmed in locations from coal mines in Borneo to office cubicles in America. The songs of Abandon and a grip of other new tracks will come out this year on the duo's first full album together, Drapetomania, colliding psychedelic trap, tropical post-folk and a punk ethos into a compelling audio thesis.

Filastine & Nova are foremost performing artists, their live show is where sound, image, and ideas are embodied. They've toured the five continents, appearing at festivals such as Sonar (ES), Downtown Cairo Arts (EG), Decibel (US), Les Vieilles Charrues (FR), Foreign Affairs (DE), Mona Foma (AU). For the new Drapetomania performance the duo are working with a guest dancer and cinematic multi-screen visuals to conjure an emergency exit from the anthropocene. Expect to find them anywhere, turning friction into beauty.

"Awesome and delicate...hybrids so fluent they defy classification" - Pitchfork

"The soundtrack to a rising heat humidity index" - Spin Magazine

"Choppy, smokey music that draws from the entire world without getting crushed under the weight of its influences" - The Fader

The Trap (Beats) of Liberation: Global Electronic Duo Release The Cleaner Video, Hit the US for May/June Tour

As a maid scrubs a wall of lurid pink and orange tiles in a public toilet, her body begins to rebel against the claustrophobic space. When faced with the empty task of mopping an empty pool, she snaps, throwing aside her tools and uniform to dance with abandon.

This is the tale of The Cleaner (release: May 26, 2016), the second installment in a four-video series, Abandon, by the electronic-meets-multimedia duo, Filastine. With one partner from Indonesia, the other from the American underground, the group’s sound and vision captures the musique concrete of global capitalism, with its mix of wretched ache and real hope. In Abandon, the duo tells four tales from four perspectives (an Indonesian miner, a Portuguese maid, American office workers, and a Barcelona’s migrant scrap metal salvagers).

“As with the first video in the series, The Miner, there are two parts, two escapes in The Cleaner,” explains Grey Filastine. “The first escape is an ephemeral daydream. She comes back to the practicality of resuming her work, then reaches her epiphany, to commit, and transform daydream into reality. Yet unlike the Miner, who flees the landscape of extraction to find solace in nature, The Cleaner finds peace within herself. Her’s is a meditative, interiorized abandon.”

The music underlines this tension, hinting at the likes of Major Lazer or Flying Lotus, but with more farflung inputs. The urgent rhythms of trap & Baltimore club collide with melodies made from shouts, noises, and fragments of voice crafted of Filastine’s street recordings from South Africa to South Asia.

Filastine shot the video on one blazing hot Lisbon day, tapping the striking Portuguese-Angolan dancer Piny Orchidaceae to embody the main character. “This is the most elemental production of the Abandon series, the story that could be told without embellishments or production tricks ,” notes Grey. “I think it’s compelling for its raw urgency”

"Filastine creates tracks so geographically and chronologically diverse that they sound less like "world" music and more like music from another world." - Pitchfork

Abandon’s tracks will be available on Filastine’s next album, out November 9, 2016.

Filastine is the duo of composer/director Grey Filastine and vocalist/designer Nova Ruth. Before starting Filastine in 2006, Grey was part of the insurrectionary marching band Infernal Noise Brigade. He spent much of his life recording soundscapes and studying rhythm across the world. One of those travels brought him to Indonesia in 2010, where he met Nova Ruth rhyming in the hip-hop group Twin Sista. Since then Nova has added her rich musical roots to Filastine’s sound; she grew up singing pentecostal spirituals, koranic recitations in the mosque, and playing Javanese gamelan. They are now based in Barcelona.

Filastine’s compositions fuse contemporary electronic beats with concrete sounds, voices, percussion, and acoustic strings. This is future bass music from a future where the globe has been flipped, the sonic territories remixed, where syncopated mid-eastern rhythms and asian melodies shape a new urban sound. Filastine have released a trilogy of full-length albums, a half dozen vinyls on an equal number of record labels, and a grip of heady conceptual mixtapes